“Tuesday Bluesday 2.0:” The Blues can smile once more 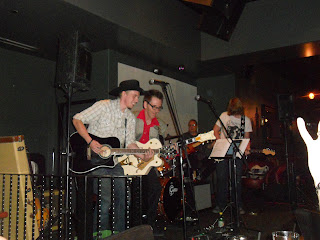 When the Glendale blues jam known as “Tuesday Bluesday” ended along with the closing of its home venue, Next Coffee Company, they went out on a high note, with a packed house – the largest turnout of the event’s history. It was a bittersweet night for all, as everyone gave their best performances onstage, unsure what the future would bring for both Tuesday Bluesday and for the group of regulars who support it.

But the following week, “Tuesday Bluesday 2.0” opened at Zendejas Grill, right next door to their former coffee shop. Without missing a beat, the group had found a new home.

Tuesday Bluesday organizer and band leader Tom Mein breaks out his familiar guitars, takes the stage with his usual band mates, bass guitarist Rich Alfano and drummer “Rumblin’” John Rumbaugh, and begins their set with their favorite blues medley. As cheers grow louder from the audience, he welcomes the crowd, “Welcome to Tuesday Bluesday 2.0!” 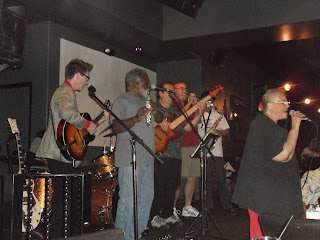 Mein explains to the crowd how grateful he and the band are to have Zendejas as their new venue to continue this event. He said, as he always does, how important it is to continue to support live music, particularly on the west side of the valley, where local talent can have a place to perform and grow.

After the band’s intro blues set,  Mein starts moving through the list of performers in the crowd who wanted to step onto this new stage and jam with other local performers. The night featured a variety of blues, jazz, funk and even some country, as Tuesday Bluesday is admired as featuring a variety of genres for all tastes to share and enjoy.

“One thing I have noticed in the past year, there’s been an explosion of all sorts of jam sessions around here,” said Mein later. “But we have one of the best varieties. That’s our niche; we’re the most varied jam session. I don’t want to be just a blues or a jazz jam, I like mixing it up. I hope it stays that way.”

One of the performers to take to the stage was Blair Robertson, a guitarist and longtime blues admirer.

“I thought the whole night was phenomenal,” said Robertson. “I’m amazed at the amount of talent. It’s great we found a new place, and so quickly. Tom deserves a lot of credit. When something goes really well, you’re under pressure to keep that up, and Tom’s doing a phenomenal job.”

Robertson said the only problem is Tuesday Bluesday hasn’t grown, it has exploded.

“I see that as a good thing, since it brings better and better talent,” he said. “Tom just has the problem of getting everyone that wants to play onstage.”

That difficulty of organizing and ensuring everyone makes it onstage is the greatest stress for Mein.

“It can get hectic, scheduling everyone,” Mein said. “A lot of players drive a long way, and if they don’t get to play, they leave. That’s the last thing I want.”

Mein said he is very pleased with Zendejas Grill, and is sure it is a move in the right direction.

“Next was nice, but there’s good food here, a family atmosphere, everything we could want,” he said. “Here at Zendejas there’s more space, nicer seating, and they stay open later than 9 p.m. We always got to the end of the night at Next, and had to cram everyone in. This will help getting everyone onstage.”

Robertson celebrated the new venue’s opening night by performing the favorite “Honky Tonk Woman.” He said later this was a new song for him, a song he has wanted to perform since high school.

“This kind of event inspires you to learn a new song,” he said. “The beautiful thing is, I screwed up, but when you play with so many other musicians, they can help cover you, and together, you all sound great. It encourages people to come up and try new things.”

Regular Tuesday Bluesday supporters Jim and Paula Cowley didn’t expect the amount of talent they started seeing on a regular basis when they started attending the jam, and were also impressed with the great job Mein does every week organizing the jam.

“I didn’t expect this,” said Paula Cowley. “It grew from a little Tuesday night coffee shop to something much bigger. Tom is one of the better players I’ve ever seen. I was also surprised at how friendly everyone was. They are so supportive of young people or all the first timers. It’s a great group of people that go do it.”

Cowley said she is certain the jam will only get bigger from here, and the new venue will help them grow their reputation further.

“Everyone was starting to notice the crowds we were drawing in at Next,” she said. “I think Tuesday Bluesday will keep growing.”

House bass guitarist Rich Alfano agrees this is a good move for the Tuesday Bluesday group, and everything he’s heard from regulars suggests this was surely an upgrade.


“We’ve retained our core of regular jammers, and seem to be adding new faces all the time,” Alfano said. “The best part for me is working with talented players like Tom and John every week, and being a continuing student of the art of music, the variety of material we run through… Country, jazz, blues, funk, there’s always something different being offered.”

Mein said he has a great time performing at and leading Tuesday Bluesday, and said it is the most fun gig of his busy week. He also enjoys seeing new players come up and perform along with the group.

“That’s part of the great thing,” he said. “It’s not just about playing with others; I really enjoy giving people an opportunity to play onstage, and watch them grow better and better. After all, one gig is worth ten rehearsals. Once you play onstage, that experience multiplies your growth. And everyone is welcome at Tuesday Bluesday.”

Looking past the story to the people who make a difference

Matt Marn
Grand Rapids, Michigan, United States
An experienced journalist, Matt writes where he can make a difference, reporting the news and showing the faces of the community. With his feature style of writing, he shows the impact of an event or an individual and shows a deeper side of the story. With his newly deepened love of music, partially due to his own adventure of learning guitar, he has also turned his writing to musicians, artists and venues who make an impact in the local music scene.